Dirk Meerkotter was born in Pietersburg (Polokwane) in the Northern Transvaal (now Limpopo Province) on the 9th of February 1922. When he was two years old his family moved to Ermelo and three years later to Johannesburg. Both his parents were musicians. His mother, a South African from British decent, met his father in Amsterdam, where they studied music. In 1911, soon after their studies, the young Dutch musician decided to follow his heart and emigrated to South Africa where he got married to his former fellow student, Caroline Ackland. Although the artist’s father was a great pianist and organist, he often had to move from one town to another in the early 1900s to find work as a church organist and music teacher, to support his family.

In spite of the fact that it was not easy to make a living with music, Dirk’s parents influenced the lives of many through the sharing of their talents as music teachers. Dirk Meerkotter, who inherited this creative talent from his parents, started developing an interest in the visual arts in his early twenties.

Towards the first of eighty-seven solo exhibitions

One of the most important things that Dirk Meerkotter realised about his occupation as a pharmacist, was that it would give him the necessary space to develop his visual ideas independently of the necessity to satisfy popular tastes in order to sell one’s work for a living.

Before Dirk Meerkotter was thirty he had his first solo exhibition at the Constantia Gallery in Johannesburg in 1950. His extraordinary talents were immediately recognised by fellow artists and art critics and the exhibition became the first of eighty-seven solo exhibitions of which the latest, highly successful two, were held in Pretoria in 2005 and Stellenbosch in 2009.

Ideas and visions in a vibrant South African art context

Since the early fifties Meerkotter enthusiastically engaged his fellow artists in discussions about modern and contemporary art movements such as post-impressionism, cubism, expressionism, futurism, surrealism and abstract expressionism . It speaks for itself that they were not able to attend as many ground breaking art exhibitions as their contemporaries in Europe and the USA were privy to, but they certainly experienced much of the nature of those exhibitions through their reading of great books and influential periodicals of which The Studio and Studio International are excellent examples.

Although Dirk Meerkotter worked for eight hours a day as a pharmacist, he often makes it clear that he never stopped thinking about art, art exhibitions and artists. In those days he made it his business to visit all the art galleries and opening of exhibitions in Central Johannesburg, which was undoubtedly a flourishing environment for artists.

Most of Dirk and Annie Meerkotter’s friends were artists, including names such as Walter Battiss, Sydney Goldblatt, Ronald Mylchreest, Fred Schimmel, Berenice Michelow, Nel Erasmus, Cecil Skotnes, Larry Scully and Taffy Whippman (pictured), to name but a few. Whippman was also the owner of an art gallery in Eloff Street, where thirteen solo Meerkotter exhibitions were held in the fifties and sixties. So productive was Dirk Meerkotter, that he managed to show new works of art every fifteen months. The mentioned, mainly Johannesburg artists, were also in contact with artists in the other main South African art centres.

Dirk Meerkotter often mentions the importance of his wife Annie’s influence on his ideas and work as an artist. Annie’s intellectual openness not only contributed to the development of their five children, but, in addition, also supported her artistic husband, who developed into a prolific abstract and contemporary South African painter. Dirk continues to refer to Annie as his strictest, yet, at the same time, his most constructive critic.

As the time went by, Dirk Meerkotter’s interest in the non-representational streams in the contemporary visual arts, developed progressively. During this period the mainly self-taught artist’s library grew exponentially. And, between the late fifties and early sixties, he became more and more fascinated by the work of the great European modern artists. Interestingly, Dirk Meerkotter observed a close link between the expressionistic, semi-abstract and abstract movements in the visual arts in the late nineteenth and the twentieth century on the one hand, and the non-representational side of some classical musicians’ work, as well as that of Stravinsky and his contemporaries, on the other hand.

Although he has a keen interest in the socio-political side of life, Meerkotter does not view himself as a story-telling visual artist. The main inspiration for his creations is to be found in the vibrating world of line, colour, texture, form, rhythm and space, which he endeavours to portray with integrity in his paintings, etchings and ceramics.

Dirk Meerkotter’s contribution to the visual arts continues to receive a significant amount of recognition. Although this recognition is obviously an outcome of the unique qualities of his work, there is another side to the story. He demonstrated a remarkable sense of the importance of hard work and an artist’s responsibility to share his or her ideas openly with others. In addition to this, one should acknowledge the courage that it takes to go public with work, which could very well challenge the public beyond popular understandings and views about the nature of the visual arts, or music, or poetry.

Dirk Meerkotter presented his work and ideas to the public in a remarkable eighty-seven solo art exhibitions across South Africa and Namibia between 1951 and 2009. He also participated in many group exhibitions in Southern Africa, Europe, Latin America and in the USA. Meerkotter, in addition, received invitations and participated in the Florence and Sao Paulo Biennales in the seventies.

In 1992 Dirk Meerkotter received a prestigious award from the Federation of Afrikaans Cultural Organisations. And, in 2001, he was awarded an honorary medal from the South African Association for Science and Art for his extraordinary contribution to the visual arts.

“Small works could be greater than large works!”

When asked to name five of his most important works sometime ago, Dirk Meerkotter’s immediate reaction was that “ – there are small and large works – oils, graphics, ceramics, and water colours in private and public collections – which fall under my best work. Small works could be greater than large works!” However, he continued saying: “In answer to your question, I am reasonably happy to mention the following works done over a period of time in different media.”

The works referred to by Meerkotter included:

A ceramic panel made for the Drama Theatre of the State Theatre in Pretoria in 1979. The theme of the panel comprises interlocking figures on a stage. The deeply carved work on self-made tiles, and entitled The Stage, are sixteen metres wide with a height of three and a half metres.

There were several other ceramic commissions of importance including one for the Sand Du Plessis Theatre in Bloemfontein (1985) and another for the University of Potchefstroom (1969-1970).

Over the years, the connection between Dirk’s brilliant and unique improvisations on the piano and the forms, colours and shapes in his studio, became increasingly obvious to his family and many of his friends. My brothers, sister and I often recall the many nights that we fell asleep accompanied by the sound coming from his piano in the lounge. And, to this day, he still finds it difficult to walk past a keyboard without playing a few lines, to say the least. The combination of the talents inherited from his parents, and his life and work as a contemporary South African visual artist, remains fascinating to the many who continue to enjoy their engagement with his ideas on canvas, in clay, and on paper. 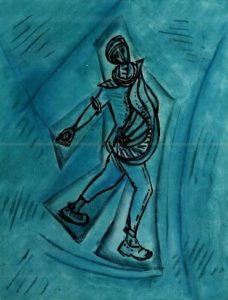 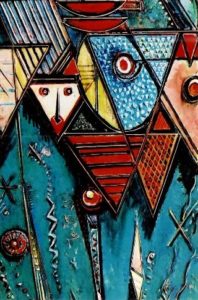 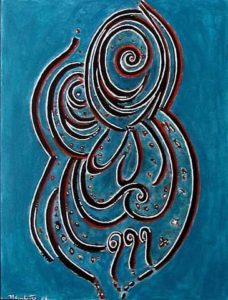 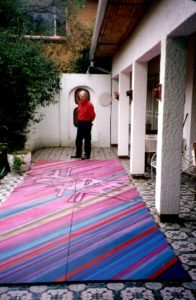 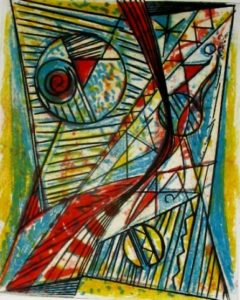 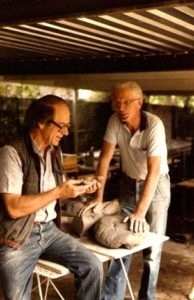 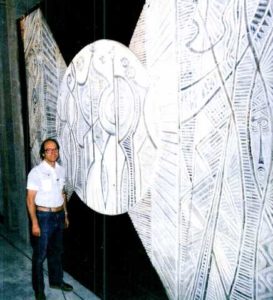 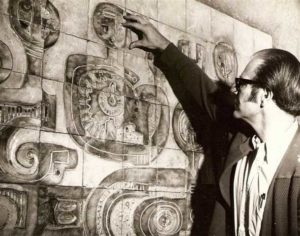 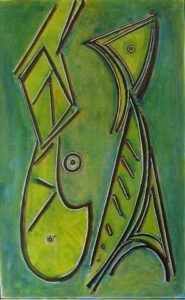 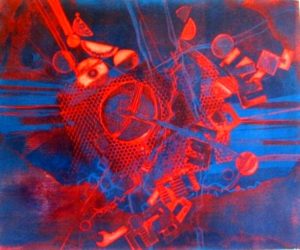